Shri K V Satyanarayana, Executive Director, DDU-GKY, Centre for Skills and Jobs NIRDPR stated that DDU-GKY is the best Skilling programme the government has ever implemented because it is not just skilling programme but a livelihood for the poor rural people. He expressed that during the period of his career to date he had seen programmes come and gone, but DDU-GKY is going to last for a very long time. He said, once you are skilled, it is not done, you will have to update your skill throughout your whole career. He said PIAs should have the skills to reach out to the candidates and convince them so that they can absorb the cultural shock during the training and also after placement. In context with the mobilization, most of the PIAs are only proving awareness to the candidate rather than conducting the whole process step by step. They should follow the tool made for the mobilization including psychometric tests. As of now the PIAs are only focused on candidates should work for 3 months after that what will happen to them after training and placement (i.e 6 months)no one knows, hence it is requested to the PIA to change thinking skills of the candidate. Hence counseling the candidates after placement is more important.

NIRD is developing an app to track the candidate. This app will be used by the PIA to keep a track of how candidates are mobilized, which trade and training center they should choose and which company they are working after placement.

In the context of North-east, he said, due to less no. of SMEs and Industries, candidates do not have the option to work in their own state, so the candidates need to work across the country, so the candidates need to be mentally prepared so that they can retain in their Job. Counselors and mobilizers need to play a major role in this situation. He said that PIAs before applying the Project they must understand the ground realities, and then apply for the project, rather concentrating on achieving numbers and gaining the profits out of project cost. 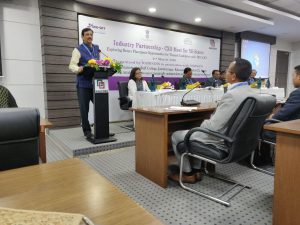 A development professional, working as a Project Officer in NIRDPR.

Dikshit Thapa
A development professional, working as a Project Officer in NIRDPR.

During inspection to Learnet skills Anantnag on 8-December-20, Candidates of Food and Beverage services were asked to show demo of attending guest and serving guest so as to check the quality training.